Beyond engineering, the architectural design of a subway station is an incredible challenge. After all, these are used by people, and people do enjoy –or not- these spaces, even when they’re not completely aware of it.

Discovering the overlooked beauty in the Montreal Metro…

Chris Forsyth, a photography student in Montreal (more specifically at Montreal’s Dawson College), has dedicated nearly two years of his career to take astonishing pictures of the subway stations of his city. His premise: “to bring out that overlooked beauty in the architecture that I find people tend to miss when they’re on their daily commute.” This is only a sample of his work.

This is the Sherbrooke station in Montreal. Quite common at first sight, but certainly the ceiling does not pass unnoticed -unless you’re in a hurry in the middle of the rush hour-. The combination of colors made by the columns, the mezzanine, the ceiling and the walls is also worthy of appreciation.

This picture manages to show the peculiar combination of colors and materials in the Jean-Talon station. Probably not a scheme that you’d use today, but then again, this subway system is more than 50 years old. Design trends were completely different back then, and some of them – like this one – are still leaving their mark. It wouldn’t have been photographed like this if it wasn’t.

Anyone might think that the next three photographs were edited so they’d look like a mix between a black-and-white and a color picture. And perhaps the illumination helps to create that illusion. But these pictures are not edited in such manner. Those are the designs of the Langelier station, the De La Savane station and the De L’Église station. A complete game of contrast where the yellow security lines are as part of the design as the tiles on the walls and the lights on the ceiling.

This is the Jarry station. A particularly remarkable place in terms of design. Its ceiling is iconic, and with good reason. It was an innovation of its time, and it still has the power to steal some glances. Its geometric structure and the recessed lights make a combination that’s impossible to ignore.

Another photograph of the Sherbrooke station. It’s almost unbelievable that we can find two completely different images of the same place in terms of color, materials and textures. This one looks almost as a tribute to Mars. The figure resembling the red planet gives some scale to the place, making the ceiling seem lower than it really is.

…and around the world

Chris has taken his project to Europe, and he has photographed some of the most famous subways stations of the continent.

This photograph of the Marienplatz station in Munich, with its vibrant curved yellow walls, brings to memory those colorful tunnels in which kids use to play in the park. The openings on the left side give a clear sign of where to go next.  Do you imagine yourself letting your inner child out when you walk through this space? Or perhaps you’re way too busy to enjoy it?

This is probably one of the most fascinating images when it comes to unique subway stations.  This famous station is Solna centrum, in Stockholm. Its red ceiling and black walls both of them carved directly onto the rock, give the impression that you’re entering nothing less than a volcano instead of a subway station.

This is only possible thanks to the geological characteristics of the rock itself, and we’re all grateful for it, since it allows this amazing space to exist.

This station, Olympia-Einkaufszentrum (also in Munich), manages to create a great contrast between the colorful ceiling and the gray metallic elements along the walls and in some points of the ceiling itself.  Its original design is reminiscent of a science fiction movie set. 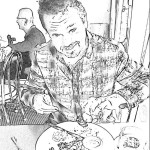 Mickey graciously contributes to Best Of Modern Design in many ways including inspiration and writing. As an experienced design professional, Mickey spends his days doing textile and pattern design for his custom home goods company. When he’s not contributing to our publication or designing fabulous textiles he can be found searching out some of the best pubs and restaurants during his extensive travels.

Looking Up For Inspiration: Unique Modern Wallpaper on ceilings